Chief, Dave (by Roland)
Big dirty raccoon (by Alexis)
Paul Bunyan (by Stevie)
Dana (by Emir and himself)
My Mariah Carey, The Jewish Channing Tatum (by Patrick)
Davey (by Artie Camden)

David Rose is Johnny and Moira's flamboyant son, who later becomes the owner of a town shop called Rose Apothecary. He is a main character on Schitt's Creek.

The self-described black sheep of the family, David tries to cope with his unexpected exile with trademark bitterness. But his sarcasm belies a deep knowledge of design and aesthetic, a craftsman’s eye for detail, and an impressive business acumen; all of which he must put to use as he strives to find a place for himself in Schitt’s Creek.

Introduced as the adult son of Johnny and Moira Rose, David is a former New York City gallerist who curated many avant-garde exhibitions and performance art pieces, but with little direction and a sheltered worldview. The tight quarters of their new home, the Schitt's Creek Motel, create friction and opportunities for David and his disconnected family as they slowly grow closer. He becomes friends with Stevie Budd, the motel clerk who shares his dry sense of humor and general distaste for other people, but generally struggles to connect with others in his new surroundings. David eventually takes a job as a brand manager at a nearby clothing store before opening his own local goods business, Rose Apothecary.

While launching Rose Apothecary, David meets and begins dating his business partner, Patrick Brewer. Despite having a rich dating history before moving to Schitt's Creek, David's courtship with Patrick quickly becomes the longest relationship he has ever had. Their relationship hits a brief rough patch when Patrick's previously unknown fiancée comes to town, but David and Patrick eventually reconcile. The couple continues to grow personally and professionally and ultimately become engaged at the end of the series' fifth season and married at the end of the sixth.

David is introduced as insecure, with a general distaste for other people. David is also highly phobic – fearing bugs, disorganization, germs, nature, and heights. He sometimes downplays or denies these fears in an effort to defy his friends' and family's expectations, but his discomfort is still apparent. David further suffers from hypochondriasis, this being revealed early in the series when David is convinced he is having a heart attack, only to discover he is suffering from a panic attack. When downplaying his fears, or otherwise expressing himself, David often displays a dry, sarcastic sense of humor and a lack of social grace. He is particularly blunt when interacting with his sister, Alexis, and best friend, Stevie, although no one is seemingly immune to his remarks. In one episode, he tells his boss, Wendy Kurtz, that the blouses she sells are "skanky." David may not know anything about paperwork or taxes or inventory, but he is exceptionally good at retail, first transforming the Blouse Barn into an upscale boutique then opening his own successful shop that elegantly rebrands local products and crafts, selling them on consignment.

One of the few assets the Rose family is allowed to retain when they move to Schitt's Creek is their designer clothing. David’s wardrobe is rendered almost exclusively in black and white and contains a wide variety of sweaters. He also frequently wears drop crotch pants and designer sneakers. David accessorizes with four identical silver rings, which he wears in a variety of configurations on his left hand. David’s aesthetic is inspired by his mother, Moira, as he is his mother’s son. His style is also heavily influenced by designers Rick Owens and Ann Demeulemeester and often includes items from Givenchy, Neil Barrett, and Tisci.

David is pansexual. This is revealed in season one's “Honeymoon” during a conversation with motel clerk Stevie Budd in which he describes his sexual orientation using a wine analogy. When asked if he drinks red (men) or white (women) wine, David demurs saying that he "like(s) the wine, not the label.". According to Levy, David's initial relationship with a woman, Stevie, is meant to dispel the notion that the character is gay due to his effeminate nature and push the boundaries of what it means to be traditionally masculine or feminine.

Levy also chose to write the character’s sexuality in an environment without homophobia. He has cited several reasons for this creative decision, including his own lack of "patience" for homophobia. Levy also calls this decision a form of "quiet protest" against the LGBTQ tragedy tropes often seen on television, and further stated that David's story is not written to explicitly educate the audience on LGBTQ issues. He says David's sexuality is presented "as it should be" to show the "transformational" impact of love without "the threat of intolerance or bigotry." This approach of acceptance and non-judgement has been widely noted by the press. 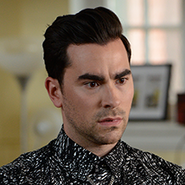 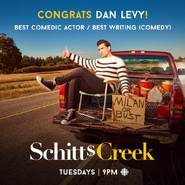 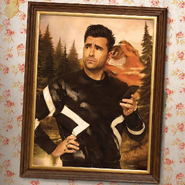 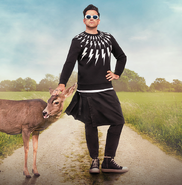 Retrieved from "https://schitts-creek.fandom.com/wiki/David_Rose?oldid=10480"
Community content is available under CC-BY-SA unless otherwise noted.