Jocelyn Schitt (née Brown) is Roland's wife and a teacher in town. She is a main character on Schitt's Creek.

Considering herself to be the First Lady of Schitt's Creek, she acts as the de-facto leader of its lady citizens. Jocelyn is determined to make Moira Rose the latest addition to her circle of friends, whether Moira likes it or not.

As a teacher at the Schitt's Creek High School, she struggles at times to earn the respect of her students, but she takes pleasure in being the object of sexual fantasy for a number of boys in her classroom.

Jocelyn is so popular that “The Jocelyn” is a hairstyle available at Jeanine's Salon, and like Jocelyn, it's blonde, bouncy and a little overblown. Jocelyn wants only to please everyone, often at the expense of her own sanity. She is also an integral member of the local all-female a capella group, the Jazzagals.

In season four, believing that she's going through menopause, Jocelyn instead gets the happy surprise of pregnancy, but it has also added stress, especially since Roland becomes needier than ever under these circumstances. She is grateful for the Roses, who are becoming more and more like family.

by season five Jocelyn’s second baby has given her a new outlook, and she’s not putting up with any nonsense anymore. She starts to peel back her cheerful exterior and show the real Jocelyn: an over-worked mom with a bit of a temper, who’s running on no sleep. Moira, impressed by this newly unleashed Jocelyn, encourages her let it all out and let loose with her girlfriends—something Jocelyn desperately needs. However, more often than not, if Jocelyn attempts to live a little less restrained or manipulate things into her favor, it backfires on her. She manages to trick Moira into taking on the responsibility of directing Cabaret, only for Moira to make her assistant director, which takes up even more of Jocelyn's time and energy.

Jocelyn is very traditionally feminine, and despite occasionally getting stressed out and being a little eccentric, she is unfailingly polite, kind, and a devoted teacher, mother, wife, and friend. However, Jocelyn sticks up for herself, but she rarely raises her voice. That changes when Moira and the other Jazzagals don't notice her post-baby stress, because as the stress of raising another baby gets to her, Jocelyn slowly grows more willing to voice her frustration and stop taking on too many responsibilities. 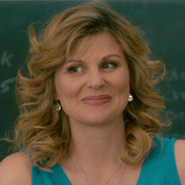 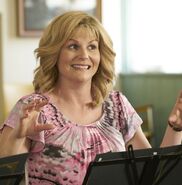 Add a photo to this gallery
Retrieved from "https://schitts-creek.fandom.com/wiki/Jocelyn_Schitt?oldid=10404"
Community content is available under CC-BY-SA unless otherwise noted.