Moira Rose is the loving wife of Johnny and a soap opera actress. She is a main character on Schitt's Creek.

Once she was the former star of a once-popular daytime soap opera, Sunrise Bay, where Moira's character Vivien Blake was best known for boldly slapping other characters when they got out of line. But now Moira has received her own slap in the face, having lost her fortune and most of her personal belongings, except for an extensive, and expensive, collection of eccentric outfits and individually named wigs.

Moira Rose is a formerly wealthy daytime soap star, most known for her role as Vivien Blake on Sunrise Bay. She and her husband, Johnny Rose, the former CEO of Rose Video, the second-largest video rental company in North America, share two adult children, David and Alexis. Moira has one known younger sister named Dee Dee. She grew up in a small town similar to Schitt's Creek, where she took pride in her self-sufficiency and ability to master the basics of everyday living. Her big acting break came when she was cast as Sally Bowles in a production Cabaret after the director spotted her working at a local gas station deli. Moira would go on to act in a number of theatre productions before being cast in Sunrise Bay, where she stayed for six and a half seasons. During her time as an actress, Moira met her future husband while cutting the ribbon at the grand opening of one of his video rental stores. The two married sometime later and have remained married for many years.

Moira is the matriarch of the Rose family, and a previously inattentive mother who often struggled to connect with and care for her now adult children. Her attempts at mothering are often awkward (such as the time she forgot her daughter's middle name) or otherwise poorly executed. Her son, David, is in many ways her favored child, but as her time in Schitt's Creek increases, she also begins to establish a relationship with her daughter, Alexis. Moira's closest confidant is her husband, Johnny, whose "straight man" demeanor balances and steadies her bombastic tendencies. This pairing continuously highlights Moira's ability to be loving and kind even when she has difficulty expressing those feelings to others.

Outside of her family, Moira's closest connections are with the mayor's wife, high school teacher Jocelyn Schitt and members of the Jazzagals a cappella group. Jocelyn and her husband, mayor Roland Schitt, are some of the first people to show the Roses hospitality when they move to Schitt's Creek. Moira is reluctant to return this kindness, but by the end of the first season displays glimmers of gratitude when she gifts Jocelyn one of her designer fur coats. This relationship grows when Moira joins the Jazzagals, a singing group founded by Jocelyn. While a part of this group, Moira also forms bonds with fellow members Ronnie Lee and Twyla Sands. Her relationship with Ronnie also extends to their work on the town council -- work they share with Roland, who sometimes frustrates Moira.

Moira carries herself with an often unwarranted confidence and poise. She still clings to her former celebrity, but also finds her gregarious nature equally suited to her new role on the Town Council, where she is determined to change the town for the better, or at least more adequately suited to her own needs. As she continues to use her platform on town council to push for events that will put Schitt’s Creek on the map, due to proximity and free time, Moira has become more involved with her children’s lives and is proud to see how ambitious and determined they’ve both become.

Moira believes she has much to bestow upon the community in terms of art and culture. Fittingly, she quickly finds herself directing a local production of Cabaret, a musical that hits close to home. With the exception of a much-needed romantic getaway with Johnny, and some quality time with the children, Moira throws all of her energy into the musical.

Moira wears a Daphne Guinness-inspired wardrobe rendered in exclusively black and white tones. The structured, designer garments set her apart from the local residents and serve as a kind of "armor" against the influences of Schitt's Creek to which Moira remains resistant. Away from the townspeople, she is no different, often wearing a business suit-inspired vest over her silk pajamas. Moira also wears a wide assortment of designer wigs, which range in style from a platinum blonde bob to short, red, and curly.

Moira is described as being spoiled, eccentric, and exceedingly dramatic. Nearly everything she does, whether it is attending a town council meeting or babysitting a child, is completed with a kind of theatric flare. Moira often pairs these grand displays with biting sarcasm, such as when she tells the motel clerk that all she needs in her room is a "bathtub and a long extension cord." But on rare occasion, Moira lets the ego and bluster fade -- displaying both a tenderness toward her children and a distinct despair over the loss of her former life.

To facilitate her over-the-top persona, Moira utilizes an indistinguishable accent and frequently peppers her vocabulary with arcane words like 'frippet' and 'pettifogging.' Actress Catherine O'Hara says that her character's unique -- what some have called transatlantic -- accent is a kind of "souvenir" from Moria's world travels.

Moira thinks about leaving Schitt's Creek every day. Unlike her husband and children, who largely settle into Schitt's Creek throughout the series, Moira remains resistant to living in the town long-term. As such, her only long-term commitment to the town has been a seat on the town council. Her time in Schitt's Creek nevertheless allows her to develop closer relationships with her family, which evolve from largely disconnected to occasionally sweet and loving as time passes. 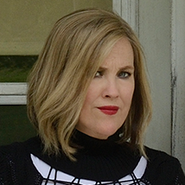 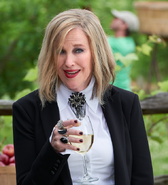 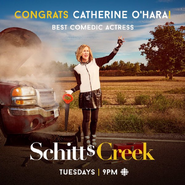 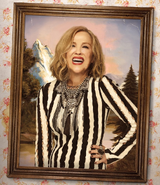 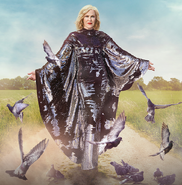 Retrieved from "https://schitts-creek.fandom.com/wiki/Moira_Rose?oldid=10019"
Community content is available under CC-BY-SA unless otherwise noted.