Beardy (by Alexis)
The homeless kid, Vagrant in a barn (by Johnny)
The barn guy, That beardy thing (by David)

Mutt Schitt is Roland and Jocelyn's formerly-estranged adult son and a rugged farm boy who turns the heads of the young ladies of Schitt's Creek, especially Alexis Rose. He was a main character on Schitt's Creek.

A lover of nature, Mutt collects compostable materials on behalf of the town, but his love of certain "plants" has landed him in community service with Alexis.

Mutt isn't much of a conversationalist, but when Alexis's jaw is hanging open, staring at his washboard abs, there's not much to talk about anyway. At a tailgate party looking for rural hunks to photograph herself with, Alexis finds Mutt and kisses him. They begin a relationship, however, his next to no communication kills his relationship with the open and gregarious Alexis.

Mutt had taken off to harvest pine cones with his new girlfriend Tennessee, but is abruptly dumped and returns home just in time for the birth of his baby brother.

Unlike his father Roland, who is overtly talkative and brash, Mutt contrasts him very much, as he is quiet and mysterious. He's a very taciturn man, and his minimal communication also clashes with Alexis's talkativeness. And Mutt's dynamic with Alexis in the first season epitomizes this, as he derides her "princess" lifestyle and manners despite his growing attraction to her. 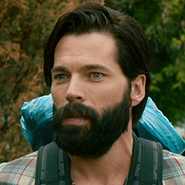 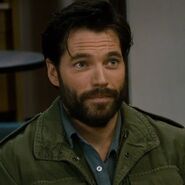 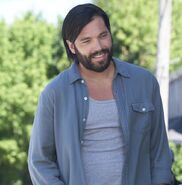 Add a photo to this gallery
Retrieved from "https://schitts-creek.fandom.com/wiki/Mutt_Schitt?oldid=10306"
Community content is available under CC-BY-SA unless otherwise noted.