Dr. Theodore "Ted" Mullens is the town veterinarian who becomes romantically involved with Alexis. He is a main character on Schitt's Creek.

Though he may seem sweet and cute, Ted considers himself to be a bit of a bad boy, sometimes cutting his PB&J sandwiches into triangles instead of rectangles or putting tiny hats on the pets when there's no one else around.

As a vet, he's the closest thing Schitt's Creek has to a doctor, since the nearest hospital is in Elmdale.

In the first two seasons, he's the broken-hearted runner-up as Alexis chooses Mutt. This is subverted, however, when Alexis and Mutt's romance burns out and she realizes she made a mistake with Ted.

In Season 4, Ted attempts to move on from Alexis by dating local farmer Heather Warner but struggles with his ongoing feeling for Alexis. Eventually, Alexis declares her love for him but wishes him happiness in his new relationship. Ted tells David he's broken up with Heather, and David encourages him to give Alexis another chance because she has changed. Ted then shows up at a Singles Week event Alexis has organized and declares his love for her in front of the crowd.

Season 5 has Ted committed to his relationship with Alexis, even as she remains somewhat insecure about their past and the hurt she caused him. When Ted gets a once-in-a-lifetime job opportunity to be a prestigious research fellowship in The Galapagos Islands he's willing to give it up to be with Alexis but she realizes its time for her to make some sacrifices for him.

Ted is obviously very attractive, but doesn't seem to realize it. And as attractive as he is, women tend to reject Ted for being too nice. This includes Alexis until she realizes her mistake.

The affable Ted also makes a lot of silly animal puns, but he's a graduate of veterinary school, runs a thriving practice and is awarded a prestigious research fellowship in The Galapagos Islands.

Ted forgives Alexis for breaking his heart, but it's a long journey before he can trust her again. Even when they become a solid couple again, Alexis is shown as being insecure about their past and feeling like she must prove herself to him. 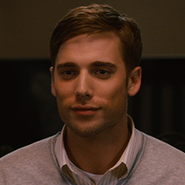 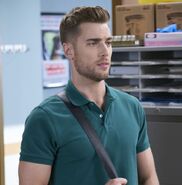 Add a photo to this gallery
Retrieved from "https://schitts-creek.fandom.com/wiki/Ted_Mullens?oldid=10514"
Community content is available under CC-BY-SA unless otherwise noted.