Trish is an escort agent who books three rooms at the Schitt's Creek Motel to run her prostitution business out of for the week.

She fools an ignorant Johnny Rose into believing that her escorts, such as Kitty, would be accountants coming from a conference in Elmdale. He also gives her a discount on the rooms since she would only be using them during the motel's off hours, the afternoon.

She makes her only appearance in Rooms by the Hour. 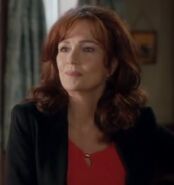 Add a photo to this gallery
Retrieved from "https://schitts-creek.fandom.com/wiki/Trish?oldid=10324"
Community content is available under CC-BY-SA unless otherwise noted.