Angela (by her mother)
Twy (by Alexis and Mutt)

Twyla Sands is the friendly waitress and owner of the local Café Tropical. She is a main character on Schitt's Creek.

You'll most likely find Twyla behind the counter (or at your table) in Schitt's Creek's Café Tropical. Just don't ask about her family.

She is always ready to lend a sympathetic ear to the Rose family, even if there are other customers waiting for service, and if the Roses' problems might seem petty compared to, say, having a father in prison. Twyla is particularly proud of her signature food creations, like the 'Greens-Free Salad", the "Surprise-Me-Smoothie", and the "Meadow-Harvest Smoothie", which changes everyday depending on her mood.

Twyla reads tarot cards to raise money for the cafe's dishwasher, and she spooks Alexis by predicting a gruesome drowning. Turns out she predicted that for a lot of people, but she also predicts prosperity and happiness for the Rose family.

At the end of season six, it is revealed at the start of the series Twyla won 92 million dollars in the lottery. She kept it a secret to the town because she doesn’t want people to treat her differently. And despite the fact that she "could be anywhere doing anything," she's decided she already has everything she needs, managing the café and listening to everyone's stories; it makes her smile. Alexis tells Twyla that it's okay to spend a bit of money on herself every so often, if it's for something special — so Twyla decides to buy the café; She plans on renaming the place "Twyla's Café Tropical", or maybe simply "Twyla's Café".

With her family, Twyla seems to be the white sheep, as they are all crooks; She thinks her relatives' multiple marriages, dismemberments, and prison sentences are totally normal, but is hard pressed to get anyone's order correct. In many ways, Twyla is Alexis's rural counterpart. She's innocently insensitive and kindhearted, yet a bit of a simpleton; She is as kind as she is airheaded. 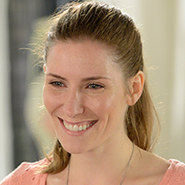 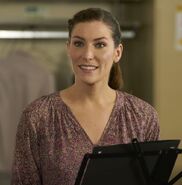 Retrieved from "https://schitts-creek.fandom.com/wiki/Twyla_Sands?oldid=10443"
Community content is available under CC-BY-SA unless otherwise noted.