Wendy Kurtz is a clothier and the former owner of the Blouse Barn, an "upscale, high-end boutique" located in Elmdale. She was a recurring character on the second season of Schitt's Creek.

She hires David Rose the job of brand manager for the boutique, even after he insulted her the first time he walked in. Wendy is very open to new ideas for her store, however, she can be quite oblivious to things happening right in front of her eyes. She is also not hesitant at giving David a lot of work to do, including the job of watching her stepdaughter, Mandy. She ultimately decides to shut down the Blouse Barn.

Later, a new business partner of hers, Antonio, gave Wendy the idea of testing a concept of a store very similar to Rose Apothecary, but calling it Wendy's Marketplace. Despite this concept doing booming business at the local Flea Market, Wendy is totally oblivious to Antonio's criminal ulterior motives of selling dollar-store valued products and branding them as locally-sourced with the Wendy's Marketplace logo, as well as charging Wendy more than what they're actually worth. It isn't until David, in recognizing Antonio from seeing him enter Rose Apothecary once, tells Wendy what Antonio is doing that she ends their partnership. 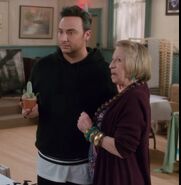 Retrieved from "https://schitts-creek.fandom.com/wiki/Wendy_Kurtz?oldid=10631"
Community content is available under CC-BY-SA unless otherwise noted.